Alka Yagnik is an Playback Singer. Alka Yagnik is born on 20 March 1966 at Kolkata, India and her real age is 54 years 5 months .

She started singing at the very young age of six for Calcutta radio. She started her Bollywood career in 1979, singing only a few lines in Rasjshri’s song Payal ki Jhankar

Followed by Mere Angne Mein, which proved to be a mega-hit. Her first solo track was Hum Tum Rahenge for Rajesh Roshan in Hamari Bahu Alka (1982). She finally got her first break through the song Ek Do Teen” from the movie Tezaab.

She has sung not only in Urdu-Hindi but also in other languages including Gujarati, Avadhi, Odia, Assamese, Meitei, Rajasthani, Bengali, Bhojpuri, Punjabi, Marathi, Telugu, Tamil, English, and Malayalam. She has worked with almost every best-known Indian composers right from Kalyanji–Anandji to Sandesh Shandilya and many more.

In her career spanning three decades, she has sung various songs with singers like Udit Narayan, Kumar Sanu, Sonu Nigam, Shaan and many more. Throughout her career, she has sung 2,486 Hindi songs in 1,114 films. She is said to be the fifth-most prolific Bollywood singer of all time after Asha Bhosle, Mohammad Rafi, Lata Mangeshkar, and Kishore Kumar. 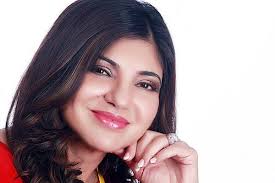 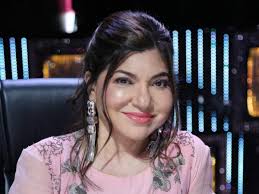 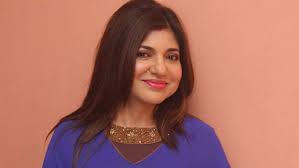